A Return to Analog

I’m finding myself drawn all the more by analog tools these days. And it would seem I’m not alone.

A while back I shared with the Accelerator community my decision to buy a fancy pants fountain pen and I guess it struck a chord. (More on that in a minute). 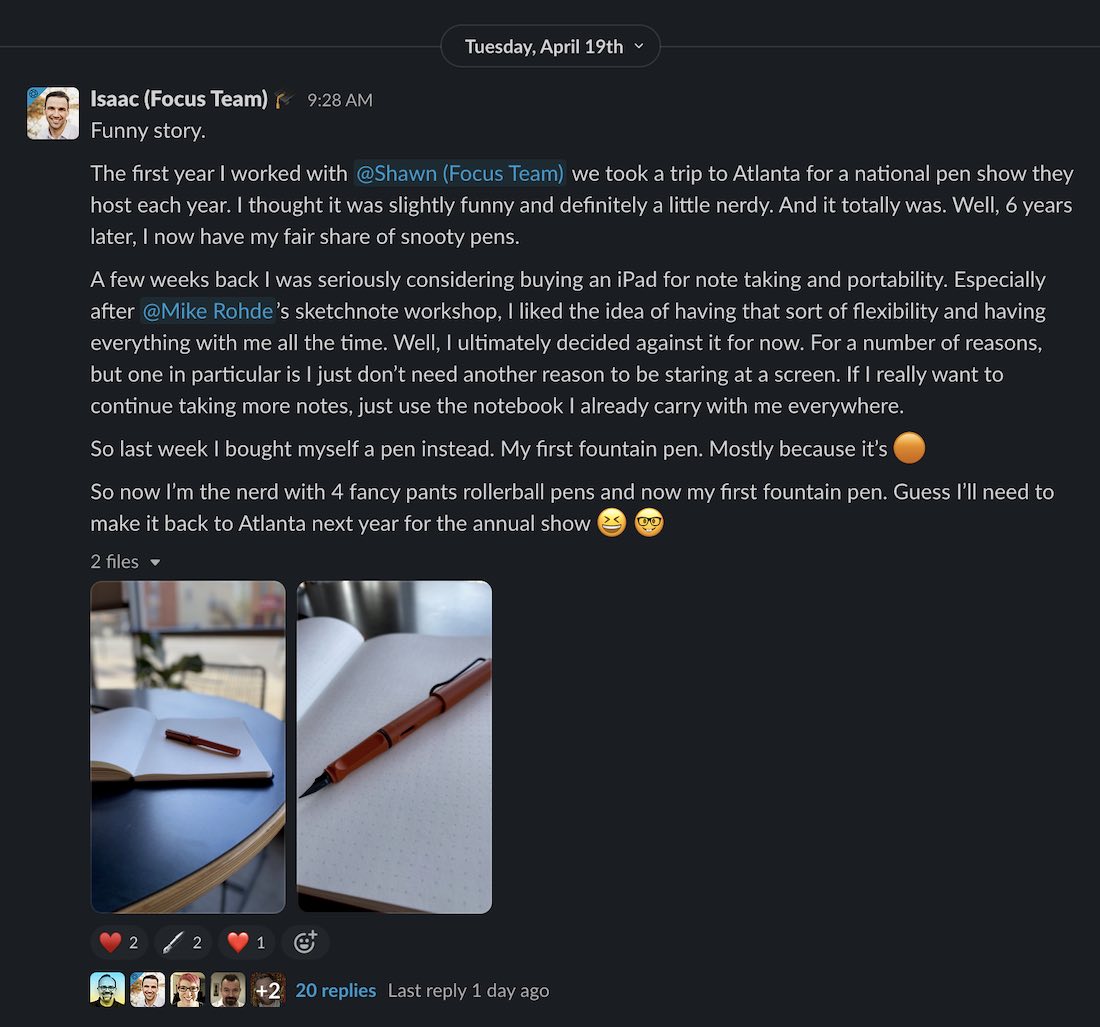 For me, one of the signs of health in emotional margin is how much I’m writing in my notebook each week. If pages begin to stack up without any notes, ideation, or doodling, it’s a sign that I’m not slowing down enough to think on paper.

Our digital age and devices have replaced a myriad of single use tools. Instead of a stereo , calculator, camera, journal, sticky note, you now have the smartphone. With which you can also check your bank account balance, crypto investments, breaking news, comment on tweet from someone on the other side of the world, and check the weather all while driving.

Over the years I picked up the concept of decoupling activities that have been replaced by the smartphone. When possible, instead of streaming music, I’ll put on a record. Instead of taking a note in an app, I’ll simply write it down on a piece of paper. If nothing else, it proves to myself that I don’t in fact need to have this device within arms reach every moment of every day.

Something about a single device removing the need to engage with people doesn’t seem helpful in the ultimate sense. The smartphone is a limitless reference tool. And I’ve developed a general unease of its gravitational pull.

How you journal is much less important than why you are doing it: To get something off your chest. To have quiet time with your thoughts. To clarify those thoughts. To separate the harmful from the insightful. — Ryan Holiday

For the Sake of Analog

I was trying to figure out how I was going to explain my wife that I bought another pen.

It’s actually kind of funny. There were days (years) I spent in giddy excitement waiting for the latest iPhone. I mean, who doesn’t love new tech? But lately, I’ve found myself un-naturally excited over a different sort of tool. Namely pens.

The shift isn’t as far-fetched as you might think. There are parts of me that still do get swept up in the latest and greatest gadget. But the allure of another device has worn off and mostly these days I’m trying to figure out how to get rid of my smartphone.

Back in April I hosted a conversation for the Accelerator community with my friend Chris Bowler on thinking and writing. He kindly pointed out that for him it’s more like walking, thinking, and writing. There’s something about doing being away from our devices that actually allows white space to think and let our mind unravel a thought.

Which at first might seem a little bit backwards. Usually we turn to our devices to get things done. But the truth is, work doesn’t happen at the computer. Good thinking leads to doing good work. Getting to good thinking will likely not happen in front of a screen. Good thinking happens out working in the garden, or on a run, or hiking in the woods, or driving in silence.

About a month ago I was considering buying an iPad for a more portable device for note-taking. Especially after Mike Rohde’s workshop on Sketchnoting. But the more I thought about it, the more I wrestled with the thought of another device pulling for my attention. I didn’t need another screen in my daily workflow. What I really needed was to use the notebook I already carry with me everywhere.

So, I bought a pen instead. 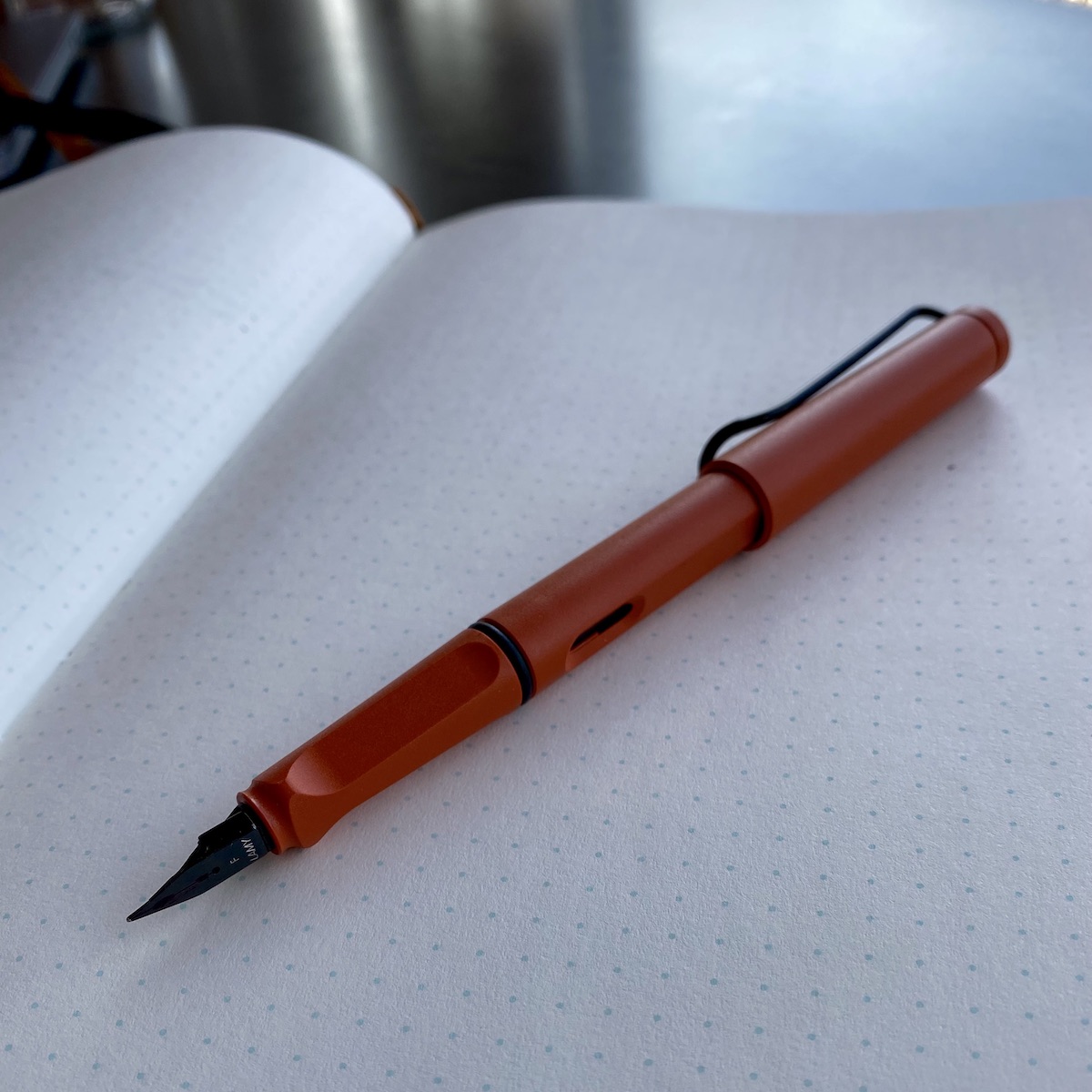