Writing about goals makes me uncomfortable.

It makes me think of all the things I want to do, but haven’t. Yet. But, that would be more of a wish list.

When it comes to achieving our goals, these are the things we’re serious about. Moving them off the wish list and taking action. Things like…

Whatever it is, what will it take for you to start?

Or, what is the thing keeping you from making progress?

I hate to be captain obvious, but doing anything is better than doing nothing. And on an equally-as-obvious note, your goal won’t be achieved in a single step. That’s why it’s called a goal. Because if you could accomplish it one step then you’d just be procrastinating something you should have done a long time ago.

BUT progress, no matter how small, is a step in the right direction. When we take action we gain clarity.

Taking action says easy but does hard. Why is it so hard to take that first step?

Reasons (read excuses) why I can’t make progress on my goals right now.

And on and on it goes. But in the end, they’re all just excuses.

You can stay there. I know I’ve camped out there a time or twenty myself. Or, you can commit to make one step toward progress.

You will gain far more clarity about how to accomplish your goal by taking action. Doing nothing gets you nothing. But action, that’s where you really start building momentum.

You Can’t Hit the Broadside of a Barn

When I was a kid, if someone was a poor shot we’d tease them saying, “You can’t hit the broadside of a barn.” Terrible, I know. Whether it was throwing a baseball or shooting a bb gun. Some of us had better aim than others.

But the only time this phrase is actually true is if you choose not to try. You might be a terrible shot, but if you were standing 20 yards away from a barn and chucked a baseball at it, I have faith that you could hit it. I’m talking about a massive barn.

For whatever reason when it comes to our goals, we let the fear of missing or the fear of imperfection keep us from the starting line. We take ourselves out of the race before the gun goes off.

Pull the trigger. Whatever your bar is, lower it by 90% and start by doing something.

What would winning look like in its smallest form?

If the ultimate goal is to run a marathon, how about just run-walking for 15 minutes? Once. You don’t need to run the marathon today. Just take a step.

If it’s eating healthy, how about making one meal this week that fits your diet criteria. You don’t need to meal plan all 21 meals for the week right now, just start with 1.

Whatever your goal may be, take the first step. The road to achieving your goals is a thousand small steps. And that’s ok. We have goals because we’re not where we want to be. So let’s make a change.

Once you take that first step. Do it again. And just keep doing that thing, no matter how small it may feel. It counts every single time.

When I asked him about how he trains for a 100-mile race he said, “I don’t let a day go by without running at least 1 mile. Even if it’s just 1 mile, I know I’ve moved myself a little closer toward my goal.”

At the time it didn’t make sense. How in the world did this guy think running 1 mile is going to help him run 100? But now I realize, it’s a mindset of success.

Build a chain of successes and keep track.

For me, this is what tracking progress looks like. 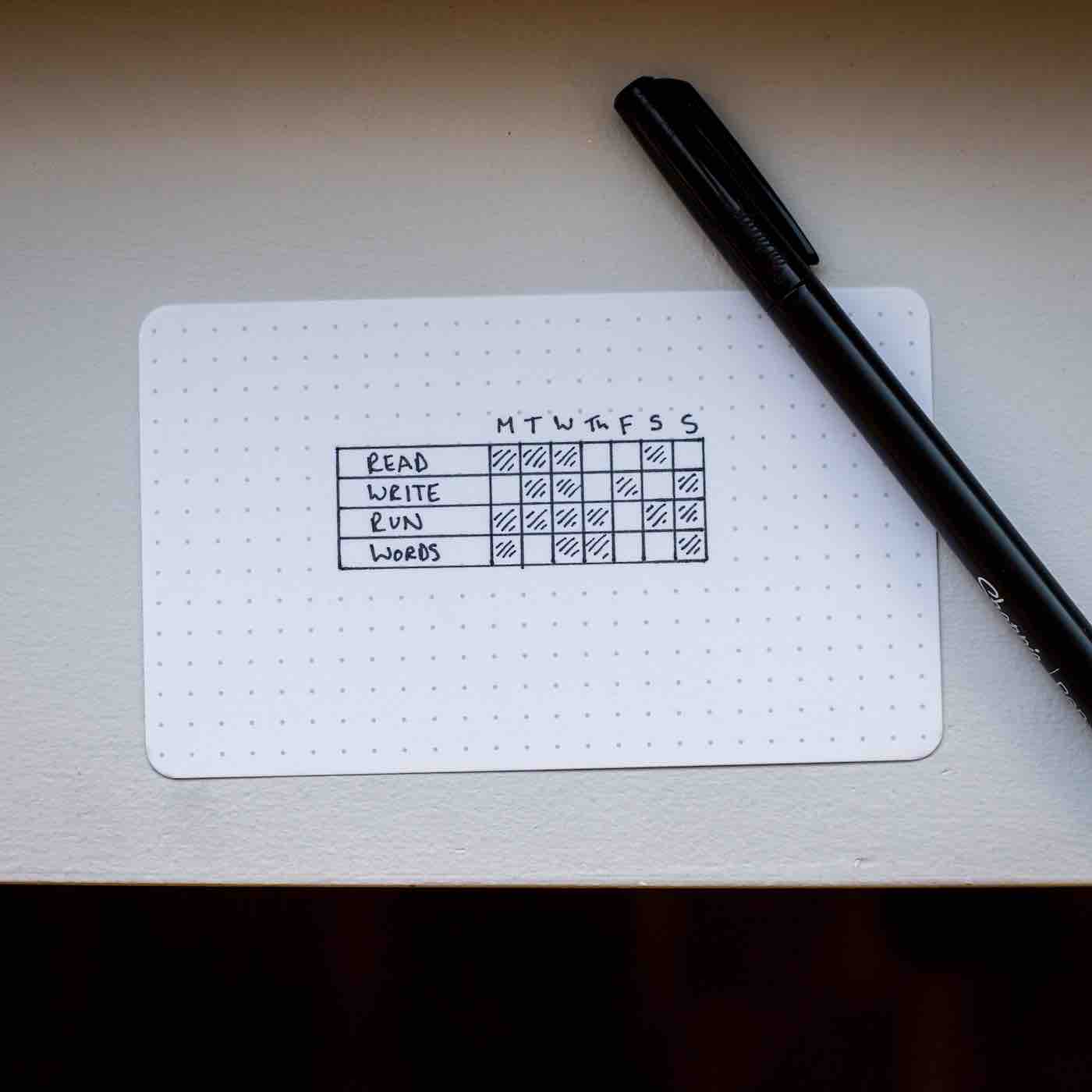 Each of the actions on my weekly habit-tracker is tied to a goal I’m currently working toward.

The only rule I give myself is to check off more days in a week then those I miss. Four out of seven is winning. I don’t have to do it everyday and even the smallest of efforts counts.

We’re looking for those slow and steady gains, not overnight success.

Once you’ve built a week or two of successes on each other, use that momentum to your advantage. What is one thing that would move you a little closer to your goal?

Instead of run-walking once a week for 10 minutes, aim for three times a week.

Instead of just one healthy meal per week, let’s move it to two. And maybe add in planning healthy snacks. Always have a healthy snack available so if you get hungry between meals you’re reaching for something on the approved list verses reaching for the snickers.

I hope you’re getting the idea by now. The point is, small and approachable micro-commitments that feel doable. String those together, and slowly start refining what those activities are to help you achieve your goal.

But whatever you do, just keep going! Don’t stop shooting the broadside of the barn. You can always go back to your low bar version and it still counts. Just don’t stop.

If you’re going to achieve you goals, commit to the process. Commit to finishing one step at at time.